What happens when someone steals the copper from your air conditioning units, rendering them useless in the dead of a New Orleans summer?

Well, you sweat. You sweat, and you get creative. We work in a building we call the Icehouse — which it was, in a former life. Despite its frosty moniker, our soaring space can heat up quickly in Louisiana’s climate.It was September 5th, at approximately 2:45 a.m., when the copper thief first decided to drop by and ransack our rooftop AC units. It wasn’t until much later that day, though, that we began to feel the effects of his handiwork. Our resident detectives, Jude and Enid (our CFO and Office Manager, respectively), dug through security footage to try to figure out what went wrong, and ultimately caught a glimpse of the thief in action.

We started making calls, got the police on the case and had an AC repair company come by to assess the situation. Three of the units had been raided and were now copper-less and, unfortunately, useless. The next day, the repair team came back to get to work. It wasn’t long before they came down from the roof, visibly shaken, to alert us of more bad news.

The thief had struck again.

Not only that, but our security footage showed that he’d come back at the exact same time, 2:45 a.m., and stolen the remaining copper from all but one of our working units. We were, in a word, heated.

In addition to the lone working unit, the culprit also left behind some copper pieces on the roof. We figured this could only mean one thing: He’d be back. One of our partners gathered his band of brothers to sleep in the office and keep watch throughout the night. (This was not authorized by anyone. But it happened.) Another couldn’t sleep and decided to take a drive around the building at, yes, 2:45 a.m. But that night, the thief decided not to show.

By September 7th, we had 20 sweaty employees, two exhausted partners and only one working unit. So, what did we do? Well, like I said, we got creative.

Now, each of our eight AC units (seven brand-new, one pre-thief) is fully protected with a state-of-the-art alarm system and a hopefully intimidating sticker, alerting anyone who comes around that they’re messing with the wrong group.

While we haven’t brought the copper robber to justice yet, we built a lot of character sweating it out together for over a week. And this caper gave us an opportunity to do for ourselves what we do for our clients — come up with a strategic, creative solution to a problem. Here’s hoping that, in this case, we don’t get any repeat business. 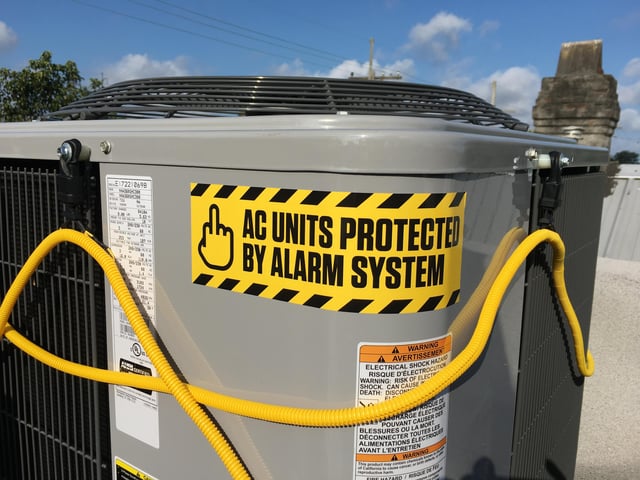